Despite all of Timmy’s mistakes, his pure athleticism has kept him in the recruiting game. 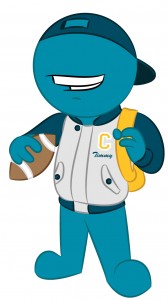 Other recruits Timmy knows who have followed a relatively similar path have fallen by the wayside. At this point letters from all over the country have started to show up. Some are similar to the letter’s Timmy was receiving before while some have started arriving hand written. Timmy’s email has started to receive good action as well despite the really bad emails Timmy initially sent out.

Impressed with the letters he received, he treated them as trophies, decorating his locker and basking in his glory. If there ever was a time Timmy was on a recruiting high, this was it! When asked about the letters and who was sending them, Timmy couldn’t tell you. He couldn’t even tell you if he had read most and there was no question on if he has responded to any of them.

Timmy was getting phone calls nightly, and he was mid-way into his senior football season before he thought about returning a phone call to any coach that called. He really was just interested in having fun with his friends. He kept telling people if they are interested in me, they will keep calling.

This week I featured 4 mistakes made by Timmy. Spot them and correct them!

#1 . “By this point Timmy’s junior season has come to an end and Timmy still has never had a quality conversation with a college coach.”

#2 “Timmy also decided to take time away from the weight room at this point as well.”

Correction: Taking time away from the weight room means not getting better; this is something Timmy, nor any recruit can afford to do. Timmy should strive to get better every chance he has.

#3 “Timmy had high hopes of finding a D1 school that let him play both football and baseball.”

Correction: While it’s admirable that Timmy wanted to play both sports in college it’s rather rare to find a school that allows this to happen, at least at the larger DI & sometimes II schools. Most times they want athletes to focus on one sport, and as a high school athlete it’s sometimes wise to do the same.

#4 “While Timmy was at the showcase he played well, well enough that he thought he should be called by most of the coaches in “attendance.”

Correction: Playing well at a showcase isn’t a guarantee of anyone getting recruited. Just because Timmy played well doesn’t mean he was noticed by any coaches. Furthermore, just because showcases advertise all the coaches showing up, it doesn’t mean they are actually in attendance. Many times showcases use this to boost attendance while advertised coaching staffs never make the trip. It’s very important to contact any coach who is “supposed” to be in attendance before signing up for the showcase once his attendance has been confirmed.

Do you have particular questions about your recruiting process? Leave them in the comments below or find us on Facebook or Twitter.