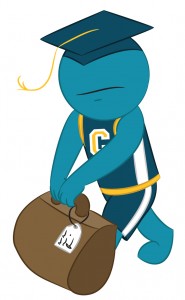 The Right to Choose

As any parent can tell you, stability is an important aspect in raising kids. That’s why this study of top-100 recruit behavior is so enlightening. Not only does it give insight into the mindset of the top players, it also establishes in no uncertain terms that elite athletes know their value as a commodity. And it’s not necessarily the best thing for the student-athlete.

In The Commitment Project, SI.com’s Luke Winn takes a look at top-100 hoops recruits over a five-year span and, while some of the conclusions are predictable, there are others that make one wonder exactly who is best served by the current system.

Did you know, for instance, that 39.2% of the top recruits went to more than one high school? 27.9% attended two high schools and 10% went to three or more. What is going on here? Viewed through the recruiting lens this is a clear warning sign since players who played at multiple high schools are almost twice as likely to decommit from a college than those who went to just one high school.

There are a variety of reasons for this, some that lay the blame at the feet of the player and others that have more to do with the school or coaches. But the bottom line for recruits is they will endure the often messy process of transferring.

One of the numbers from the study that really jumps off the page is the 47.8% of early-committing (3-4 years out) top-100 prospects who later decommitted. This has been a growing trend, especially in college basketball, and one that in almost half the cases simply seems to complicate matters. Obviously the competition for the top players is fierce and a top-100 commit can change the trajectory of a program and/or coach. But when is an early commit too early?

The reasons for decommitting can be hard to pin down, but most of them come down to immaturity, bad advice, or family reasons. And, of course, 37.4% of decommitments can be attributed to school factors like a coaching change or NCAA penalty.

For most recruited high school athletes being in the top 100 is only a pipe dream. Still, some of these disturbing patterns will hold for other athletes as well and can be instructive even if it’s only as a lesson in what not to do.

Matt Gatens–an athlete mentioned in the article–chose to stay at the University of Iowa his entire career despite challenges, including a coaching change. The take away? Gatens found the process rewarding, became a part of a building program, and realized the grass isn’t always greener somewhere else.

If you have questions about decommitting please use the comments section below or connect with us on Facebook or Twitter.