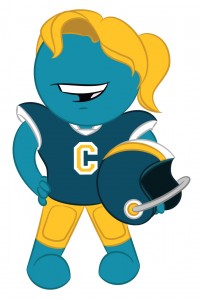 We recently had an athlete phone in with an interesting question: why can’t girls earn football scholarships?

The truth is female football players can earn a scholarship to play in college. However, it is rare.

You won’t find many female football athletes at the college level. While there has been a rise in female participation in both high school and college level football, it is still not very common. There are several reasons for that. Mostly, there are just a lot of girls who don’t want to play and have no interest in playing football. Some girls might be scared or intimidated by the idea of having to try and play against bigger and stronger guys. Whatever the reason may be, football is certainly a male-dominated sport.

Many people assume that the limited presence of females in football is linked to the Title IX amendment that was put in place in 1972. Title IX was established to prevent gender discrimination in programs that receive federal funding, and this extends into collegiate sports. While Title IX does affect the number of scholarships available for different sports programs, it doesn’t weigh heavily in this case.

So what about those girls who do play football and want to compete at the college level? Well, there are opportunities out there for you… but they are few and far between. The simple truth is that most girls can’t match the physical strength of male football players. That is why the few females who have played collegiate football play positions like kicker; they have the skills and talent for the position but not the size or strength needed to tackle other players to the ground.

NCAA Division I football is considered a head count sport, which means that any scholarships available are full scholarships. This means that any female vying for a DI scholarship is battling against the other thousands of high school football players, most of whom are stronger and faster than her. Naturally a college coach is going to recruit the better player.

In the other divisions, football is an equivalency sport, so scholarships can be divided between multiple players. That means there are more partial scholarships available, including those for female football players. But, again, in order to earn one of those scholarships, you have to prove to the coach that you are worth their scholarship and that you can make a difference on their team.

So if you are a female football player looking for a collegiate opportunity, here are some tips: