For many athletes, being able to compete in sports is their whole life. They have a strong 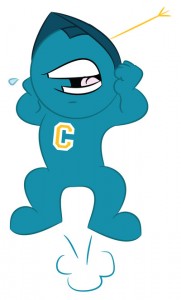 passion for their sport and the drive to do the best they can in every practice, competition, and tournament. This dedication is often what separates athletes from recreational participants.

Being passionate about your sport and your performance is directly related to your emotions; and sometimes emotions can affect your game. It’s one thing to be disappointed about an outcome of a game or celebrate a big win, but when athletes start taunting and making fun of other players, you have let the game get the best of you, and that is not what sports are about.

Have you ever been in a game or race where things weren’t going your way, and you became increasingly frustrated about it? You get to a point when you are ready to lash out on the opponents, referees, or even your own teammates. Just ask David Nalbandian about his recent disqualification from the ATP Queen’s Cup after he kicked a board out of anger and ended up injuring a line judge. If you let your anger affect your game negatively, it could cost you playing time or even your roster spot. This can cause all sorts of problems in recruiting, especially if it happens frequently.

College coaches want to recruit athletes who know how to control their emotions and their anger. That is part of being a good athlete. This demonstrates a level of maturity and professionalism if they don’t have to constantly keep you in check. If they see a high school athlete who is constantly getting ejected from games or displaying poor sportsmanship, they will think twice about putting them on their roster. They don’t want to babysit; they want athletes who will always work hard, despite what the outcome of the game is.

Here are some tips to keep yourself in check:

– Count to ten and take deep breaths. Sometimes you need to remove yourself from the situation for a few seconds in order to calm down.

– Talk to your coach. Sometimes being able to express your anger and frustration helps. Your coach might have some insight for you to help you move beyond your anger and focus on your performance.

– Think of the consequences. Yes, you’re angry and want to lash out on someone, whether it be verbally or physically. But is it worth it? Physical violence against an opponent can get you ejected and suspended, so think before you act.

Do you need more help in your recruiting? Leave your questions in the comments below or find us on Facebook or Twitter.