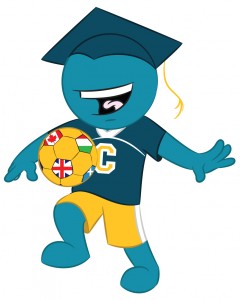 Over the past decade the number of international athletes playing college sports in the United States has tripled to well over 11,000. In many sports, most notably tennis and soccer, international players can swing the balance of power and even change the way the game is played.

One of the earliest and most memorable international players was the University of Houston’s Hakeem Olajuwon. He grew up playing soccer in Nigeria, came to America and led the Cougars to three basketball Final Fours, before going on to a stellar NBA career.

It is especially important for international athletes to understand the rules and regulations of playing in America. Of the 490 incoming athletes penalized for amateurism violations in 2009, 434 were foreign students.

Football is even getting in on the act. LSU and Alabama played for the BCS National Championship last season and each had a prominent player from overseas.

Mature and Ready to Play

Florida State star defensive end Bjoern Werner is from Germany. This coming season players from England and Switzerland are expected to compete at both starting offensive tackle spots for the Seminoles. FSU football coach Jimbo Fisher says foreign players are often more mature, meaning they are ready to play sooner.

There is some controversy, however, associated with the influx of foreign athletes. Some coaches believe it makes for an uneven playing field, forcing them to recruit foreign athletes to compete.

An Entire Team From Overseas

Baylor, for instance, won the Big 12 women’s tennis title without a single American player on the roster. Is this depriving American athletes of opportunity or raising the level of competition?

The same arguments have been made in other sports, especially soccer, where nationally-ranked programs like UCSB have had key players from Germany and other countries. Proponents of the flood of foreigners into college soccer say it has made the game better, with more technical and accomplished players.

If you’re a foreign-born athlete who wants to play college sports in the United States the issues that face American athletes are the same ones in play for you. The process doesn’t have to be a mystery. It still comes down to understanding the academic requirements and getting exposure, most often through a great highlight tape.

If you have questions or comments about how you can play college sports in the United States please use the comments section below or connect with us on Facebook or Twitter.