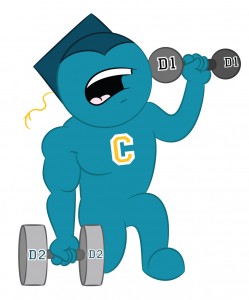 What it Takes to be a Division I Athlete

Most of the time people are confused about what qualifies different schools to be NCAA Division I, II or III. When making the choice on what is the correct institution for you, you should choose a program that best fits your competition level. You have higher performing schools and conferences at all division levels so make sure you look at schools individually instead of as a division as a whole.

Every Division 1 school has to sponsor at least 7 sports for men and 7 seven sports for women (or 6 men and 8 women). At least 2 of the sports for both men and women need to be team sports. Each sports season–Fall, Winter and Spring–needs to be represented by both men’s and women’s sports.

There are participation criteria per sport and scheduling requirements. Except for football and basketball, 100% of scheduled competition has to be against other Division I schools when scheduling the NCAA mandated number of matches in a season.

After the mandated number of games/meets/tournaments have been scheduled, 50% of the overage competitions can be against non-Division I schools. For men’s and women’s basketball all but two games have to be played against Division I teams and a third of all men’s basketball games must be played at home.

Football is broken up between 2 subdivisions: Football Bowl Subdivision (FBS), formally known as Division 1-A or Football Championship Subdivision (FCS), formally known as Division 1-AA. FBS teams are normally your higher ranked, nationally recognized teams. They have to meet a game attendance minimum of 15,000 attendance at a home game; this has to be met at least once in a two year rolling period. FBS schools do not have an attendance criterion that has to be met.

Division 1 schools must also meet the minimum and cannot exceed the maximum amount of financial aid (athletic scholarships) mandated by the NCAA for each sport.

As you can see NCAA Division I status is given based on a set of ground rules mandated by the NCAA, but not by specific athletic standards. This means that you will want to look at schools across all division levels to see where you fit best.

If you have questions or comments about NCAA rules or what Division level might be the best fit for you please use the comments section below or connect with us on Facebook or Twitter.